Daniel Sathyanesan spent two years at tech behemoth Apple as a user experience designer on the Apple Card before venturing out on his own.

While running his own business — a service-based design agency — Sathyanesan quickly realized that banking options for a digital solopreneur were less than ideal.

In his view, there were “amazing banking products” available for individuals, startups, small businesses and large corporations, but that the digital entrepreneur “has been left behind.”

“Their challenges may look for income to look a bit different from the average brick and mortar business — cash flow is unpredictable, revenue is taxed as personal and it’s very difficult to access capital,” Sathyanesan said. “There are other neobanks going after more of the freelancer/gig work economy such as Found and Lili, but no one really serving solo digital entrepreneurs, which are a pretty big and fast-growing segment.”

So the designer did what any enterprising entrepreneur would do, and set out to create the products he wished existed on his own. In August 2021, Winden was born as a neobank that offers deposit banking, spend management and other financial products for digital entrepreneurs. Specifically, Winden is gearing its products primarily toward single-person e-commerce businesses, but also digital freelancers and agencies.

And today, the startup is announcing that it has raised $5.3 million in a seed funding round led by storied venture firm Accel.

“I had no intention of wanting to do a startup,” Sathyanesan told TechCrunch. “I was pretty happy with making money from running my own business and by myself, but it was just such a frustration and I felt someone really needed to build a good solution to this.”

Notably, besides getting backing from Accel, Winden has also received validation in the way of some high-profile investors, including the venture fund of spend management startup Ramp; Sheel Mohnot, co-founder of Better Tomorrow Ventures; Lachy Groom and founders of a number of fintech unicorns such as Deel co-founder and CEO Alex Bouaziz; Ramp co-founder Karim Atiyeh; Pipe co-founder and CEO Harry Hurst; Klayvio co-founder Ed Hallen as well as Tarek Mansour, co-founder and CEO of Kalshi.

Today, said Sathyanesan, Winden offers digital entrepreneurs such as free ACH, wire and check payments and the ability to manage transactions, payments and expenses in one place. It also offers “unlimited” cash back on ad spend, and access to “an expert community” that can help them navigate the challenges of running an independent business. Unsurprisingly, considering its backers, Winden also offers spend management through virtual and physical cards.

The six-person company unveiled its product earlier this year and already has nearly 2,000 approved customers, according to Sathyanesan, including Marz Agency, SLURP! Straw and Betafish Labs.

“We’ve done all this with zero sales and marketing,” the executive told TechCrunch. “As a fully technical team, with our funds we’re going to make our first go-to-market hires.” 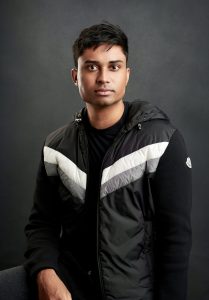 So how did a designer get hooked up with such a large venture firm at such an early stage? In an example of how the fintech world can be big and small at the same time, Sathyanesan got introduced to Accel via the CEO of Unit, a startup that Winden works with to facilitate some of its banking-as-a-service features. Accel led that company’s Series B.

Accel Partner Amit Kumarwho once was a technical founder himself, believes the rise of embedded fintech has led to an increase in “purpose-built” financial applications suited for “unique” market segments.

“As embedded banking becomes the norm, we’re going to see increased fragmentation in financial offerings for end consumers. The winners are going to separate themselves by a relentless focus on their particular demographic,” Kumar told TechCrunch. “In Winden’s case, they are focusing on a segment that most product offerings have overlooked. Their depth of understanding of the specific problems faced by digital entrepreneurs has allowed them to build a better, more tailored product — and certainly the early feedback and word of mouth is strong evidence of that.”

The company plans to spend its capital in part to do some hiring, including a go-to-market team as mentioned above, with plans to have 50 employees by year’s end.

My weekly fintech newsletter is launching soon! Sign up here to get it in your inbox.