The payback period is the amount of time it takes a business to recoup invested funds or reach a break-even point. It is particularly useful when deciding whether to invest funds in a new project.

We’ll explain what the payback period is and provide you with the formula for calculating it. 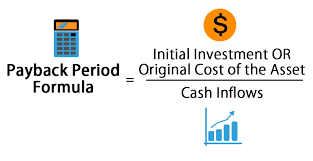 Overview: What is the payback period?

Any time a business purchases an expensive asset, it’s an investment. Capital equipment is purchased to increase cash flow by saving money or earning money from the asset purchased. For example, let’s say you’re currently leasing space in a 25-year-old building for $10,000 a month, but you can purchase a newer building for $400,000, with payments of $4,000 a month.

While you know up front you’ll save a lot of money by purchasing a building, you’ll also want to know how long it will take to recoup your initial investment. That’s what the payback period calculation shows, adding up your yearly savings until the $400,000 investment has been recuped.

Similar to a break-even analysis, the payback period is an important metric, particularly for small business owners who may not have the cash flow available to tie funds up for several years. Using the payback method before purchasing an expensive asset gives business owners the information they need to make the right decision for their business.

Calculating the payback period is also useful in financial forecasting, where you can use the net cash flow formula to determine how quickly you can recoup your initial investment. Whether you’re using accounting software in your business or are using a manual accounting system, you can easily calculate your payback period.

What is the payback period formula?

This means you could recoup your investment in 5.5 years. It’s important to note that not all investments will create the same amount of increased cash flow each year. For instance, if an asset is purchased mid-year, during the first year, your cash flow would be half of what it would be in subsequent years. When that’s the case, each year would need to be considered separately.

For example, if the building was purchased mid-year, the first year’s cash flow would be $36,000, while subsequent years would be $72,000.

This means the amount of time it would take to recoup your initial investment would be more than six years.

Cathy currently owns a small manufacturing business that produces 5,000 cashmere scarfs each year. However, if Cathy purchases a more efficient machine, she’ll be able to produce 10,000 scarfs each year. Using the new machine is expected to produce an additional $150,000 in cash flow each year that it’s in use.

The new machine will cost $350,000 to purchase, and Cathy doesn’t want her funds tied up any longer than three years. Let’s calculate the payback period to see how long it will take Cathy to recoup her investment:

The result means that Cathy can recoup her initial investment in a little over two years. That’s less than her three-year requirement, so Cathy goes ahead and purchases the machine at the beginning of the year.

While the payback period calculation is a helpful tool for decision making, there are a lot of things it doesn’t address, such as capital expenditures and overall operating cash flow, which should also be included in the decision making process.

How the payback period calculation can help your business

Are you still undecided about investing in new machinery for your manufacturing business? Perhaps you’re torn between two investments and want to know which one can be recuped faster? Maybe you’d like to purchase a new building, but you’re unsure if the savings will be worth the investment. Calculating the payback period for the potential investment is essential.

Calculating your payback period can be helpful in the decision-making process. It may be the deciding factor in whether you should go ahead with the purchase of that big-ticket asset, or hold off until your cash flow is better. Small businesses in particular can benefit from payback analysis simply by calculating the payback period of any investment they’re considering.

Before you invest thousands in any asset, be sure you calculate your payback period. You won’t be sorry.