China’s signature biannual tradeshow, the China Import and Export Fair, commonly known as the Canton Fair, is up and running despite coronavirus flare-ups, with the latest session that begins Friday going online-only with a record 2.9 million-plus products on show .

The 131st session, a 10-day event running until April 24, has attracted about 25,500 domestic and overseas exhibitors, the event organizer said in a statement sent to the Global Times on Thursday.

Among the 402 overseas firms from 32 countries and regions subscribing to the event are US-based industrial conglomerate Honeywell, a Fortune 500 company, Germany-based Wedo Tools, and Japanese home appliance maker Sezze.

Attending firms have uploaded more than 2.9 million items, including more than 900,000 new products and more than 480,000 green and low-carbon exhibits, all hitting all-time highs.

The show has made continued headway in forging global partnerships, having signed cooperation agreements with 14 industrial and commercial agencies from Vietnam, Laos, Kuwait and Iraq, among other countries and regions along the routes of the Belt and Road Initiative and members of the Regional Comprehensive Economic Partnership, Xu Bing, spokesperson of the Canton Fair and deputy director-general of the China Foreign Trade Center, told a press conference on Thursday. 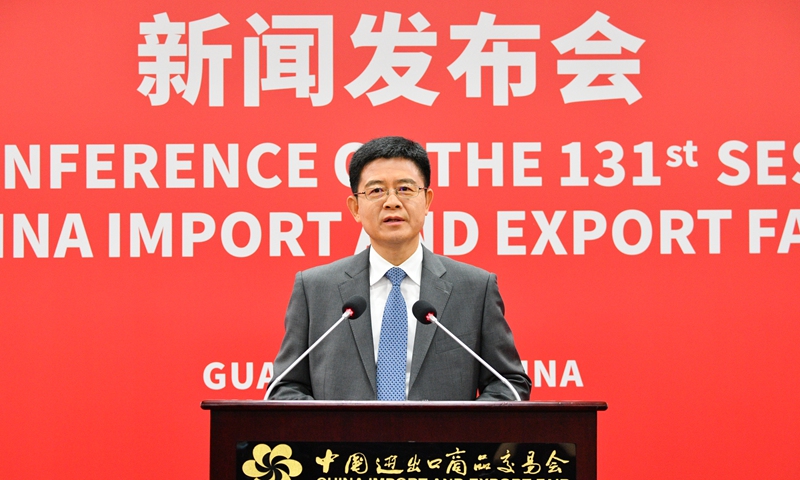 Xu Bing, spokesperson of the Canton Fair and deputy director-general of the China Foreign Trade Center, on a press conference on April 14, 2022 Photo: courtesy of Canton Fair

The Canton Fair’s global partners are set to hit 170, an indication of its expanding circle of foreign trade friends, according to Xu.

The global pandemic is still raging, and the global economic and trade rebound remains subject to uncertainty, with goods trade losing momentum. The forthcoming online session in the face of all these challenges fully indicates China’s unwavering resolve to expand opening-up, and it would augur well for the stability of supply chains, the spokesperson said.

The online event fits into the digital economy’s development, and it’s also a pragmatic choice responding to the virus’ fallout, Shu Jueting, spokesperson with the Ministry of Commerce (MOFCOM), told reporters on Thursday.

Holding the Canton Fair online breaks time and space limits, and it enables exhibitions and negotiations to go on 24 hours non-stop, Shu said.

This convenient format with lower costs allows purchasers and exhibitors to stay indoors while buying and selling globally.

The online platform for the 131st session is more interactive, with the addition of buyer information authorization functionality that enables authorized exhibitors to browse buyers’ information, send business cards and start instant chats, according to Shu.

“The tradeshow has also introduced new services such as China-Europe freight trains, seaborne shipping and cross-border e-commerce, and overseas warehouses, among other new business models, to help businesses in improving trade services,” the MOFCOM spokesperson said.