This year brings all the twos together. February will mark a particular Tuesday that will be the 22nd day of the second month in the year 2022. Otherwise written as 2/22/22. Whether or not you believe in numerology, this is a once-in-a-lifetime moment for bartender turned businesswoman Jennifer Stefanacci Portier.

Her appropriately named venture 22&Co. (pronounced tutu) has emerged as a local favorite and award-winning bar that blends the worlds of glitter, craft cocktails, and as you’ll see from this interview, a very diverse group of patrons. to Jevne Miller, a longtime friend, and DJ who has worked with her on events, “Jenn’s love for the tutu and fun has been apparent since we started throwing our tutu parties. Her positivity and drive shines through with everything she does which is clearly represented in 22&Co.”

The celebrations for “The Year of the Tutu” will kick off with an “epic dance party” at downtown’s outer Aquaplex, which also houses Sidebar and restaurant Poké in the Rear. 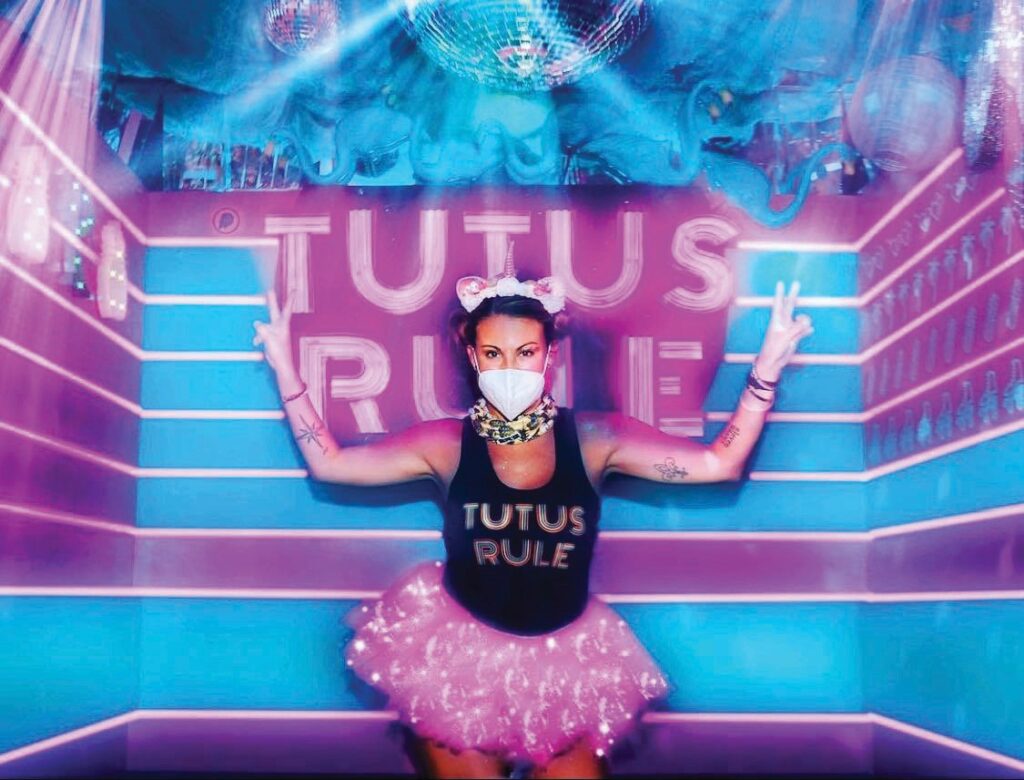 In anticipation of this milestone, Jenn, who once was publisher of this edition of Florida Weekly, answered 22 questions that covered a lot of ground including the time she helped convert a group of white supremacists, the most treasured items kept at the bar, plus one especially insane tutu she will never forget.

What was the most memorable tutu you ever saw in Key West?

That’s a hard one. This small town is big on creativity! I’ve seen people take the theme to a whole other level. However, there is one I always remember. Tutu Tuesday is no tutu, no entry. One year a guy wanted to come to the party so bad he cut palm fronds and made a tutu out of them. His hands were bleeding.

What tutu extravaganza have you planned for the year?

We will be hosting an amazing Tutu Party at Poké in the Rear, Sidebar, and 22&Co! DJ Sanaris, DJ Chaka and DJ John Neal will be keeping us dancing in our tutus all night. 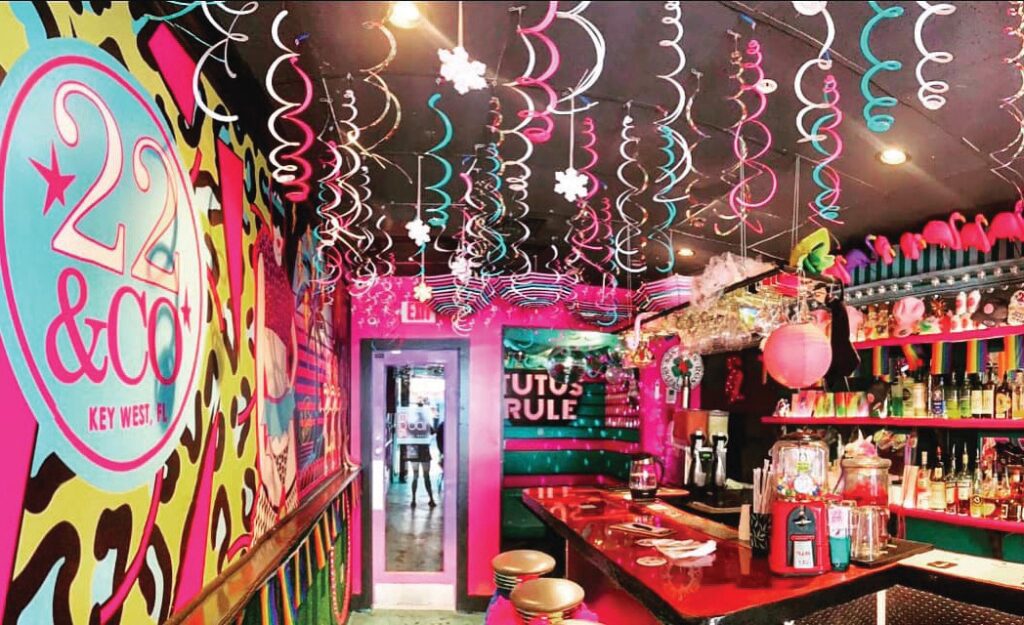 Why did you name your company 22&Co. and not Tutu&Co?

My birthday is Nov. 22. My and Chris [Schultz’s] favorite number is 22. We obviously love tutus so it fit perfectly. I swear the number 22 follows me everywhere I go whether it is a receipt or the time on the clock. We are a hidden little bar and we always hear, “Oh I was looking for TUTU and Company, not 22&Co.” But remember it’s pronounced “Tutu and Co” suckas!

Who are the personalities who attend your bar?

We like to say we are a dive bar for unicorns. All walks of life come to 22&Co. We’ve had everyone from international celebrities, our own local homeless, and everyone in between who have become part of our 22 family! I remember at the original 22 on Duval Street, we had people of all demographics in tutus dancing on the sidewalk when an older man came up and said — “If the whole world was like this little bar, we would all get along!” 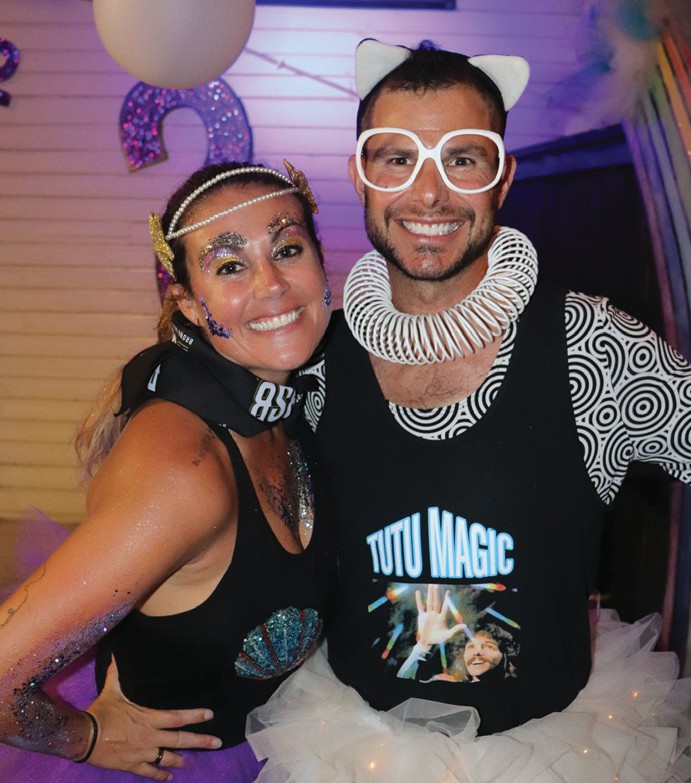 Was there an exact moment you knew your bar and its concept had taken off?

We were really hitting our stride at our old location when we closed. It was the same in the new space. When COVID hit, we were becoming a regular stop for people. We kept the brand alive doing the Tutu Mobile. The week we reopened, a bunch of people came in that we had done Tutu Mobile deliveries for throughout COVID. They had never been to 22 before. It was then I realized that our time was well spent during the pandemic and we would be able to pull through.

Is there a secret menu at your bar?

Yes, there is. It’s more like a bartender’s menu with Last Word and Bee Knees. We are working on a revamp of our menu over the next few weeks and will also be putting out a Valentine’s menu. 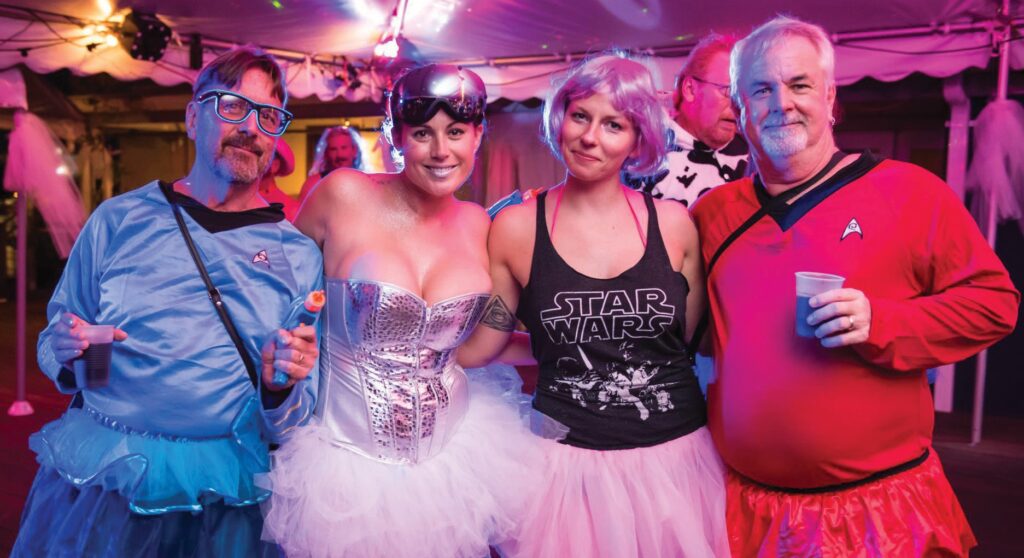 What songs would comprise an anthem of tutu?

That’s a good question — I’m not sure of a specific song. You can wear a tutu and listen to any song from Iron Maiden to Taylor Swift and be happy in your tutu.

Was there a point during the pandemic when you seriously questioned 22&Co’s ability to make it to 2022?

Chris and I actually went to Michael Ingram [owner of Aqua Key West] on July 22, 2020, of all days and told him we could not afford to pay rent anymore and we would be closing. His exact words were “I’m not worried about that—we need to open a restaurant to get the bars open.” At that point, the only way to have your bar open in Florida was to also serve food. Vodka plus soda equaled COVID. Vodka plus soda plus French fries equaled you are good. I can’t boil water, so the chance of me opening something was out. But Grant [Portier] had just been laid off by his job in the liquor industry and was a trained chef. That afternoon, there was a handshake and construction started. Two months later, we have Poké in the Rear! 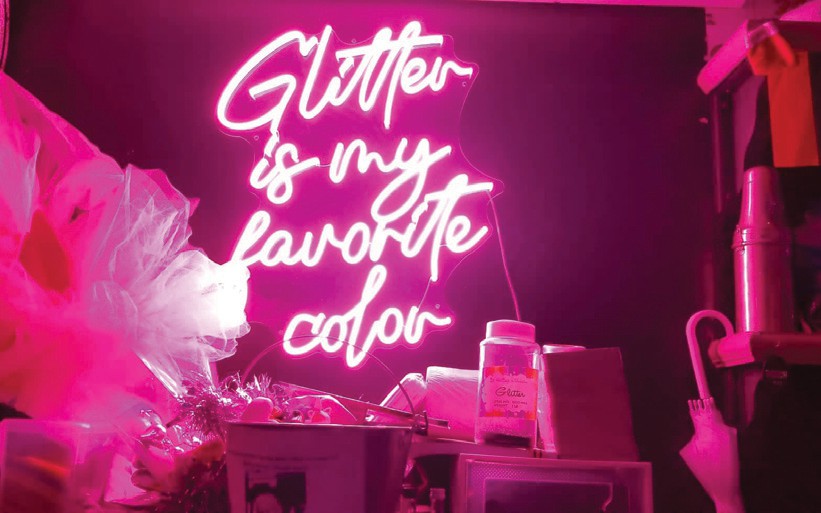 Poké In the Rear debuted as your bar’s sister restaurant. How does its menu connect to the breezy neon vibes of the bar? The bowls are named after our famous drag queens and there is glitter on the seaweed salad. There is as much character and characters at Poké as there are at 22. Both of the bathrooms are something to see! Twisted Tinsel is also a spin-off with a year-round holiday vibe.

There was a recent viral story about a bartender helping locate two wanted suspects in Key West.

Have you ever played detective in your years of restaurants and bars?

Actually, there are a few times Key West’s bar community has come together to catch criminals. One guy was walking out on tabs all over town but didn’t ring up enough to make it a felony, so the cops weren’t very concerned. We all took to Facebook and would alert each other if he had come into their bar or restaurant. He was finally caught at Hurricane Hole by a group of servers and bartenders who held him until the police arrived. Another one happened over years of these guys coming and doing chargebacks with stolen credit cards. I can’t talk much about it but he is in jail for a very long time. 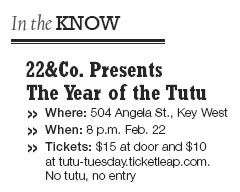 You once ran for the City Commission. Most important policy or legislation you would like to see the city enact?

I ran for city commissioner four years ago to give the working class a voice. I would love to see affordable housing actually be affordable and accessible. It isn’t necessarily a certain policy or legislation. It’s the city or county making a decision, sticking with it, and making sure what was decided actually is through in a timely fashion.

Is the artist and bartender Tom Flip your secret weapon?

Flip has been my right-hand man since we moved to Angela Street. I don’t know what I would do without him. Whatever idea we come up with, he figures out how to execute it and always says “Yes — this is crazy, but yes, I can figure it out.” He is the Tutu Underboss — it evens says on his business cards.

Do you get a noticeable number of non-alcohol drinkers?

Yes, we get a good amount of non-drinkers — you and Gwen Filosa are some of our top customers! We have a great selection of purée and syrups to make almost anything a non-alcoholic beverage. Dry January? Super September? We got you!

Who are some of the most interesting personalities who have come to your bar?

The white supremacists who did not have a nice word to say about anyone who was not white and straight were definitely strong personalities. Really, they needed a hug and someone to talk to and a little education about Key West and our culture. By the end of their seven-day vacation, Grant got them in tutus and they even took a picture and got it printed for him at Poké. Max, of course, is a well known personality around town with his wings and thong. Everyone knows him and you can’t miss him. We had a salty fisherman try disclose that he likes to dress as a woman in the privacy of his own home and might even feel comfortable enough at 22 to it out in public. Renee, the homeless woman who has lived here for 20-plus years, is our regular as well. Everyone in Key West has a story. It’s worth it to take the time and listen with an open mind and heart. That’s also why Flip’s podcast [Tom Flip’s Key West Podcast] is so awesome—you never know what you will find out about your neighbor.

Is life nothing without drama?

I don’t have time for drama. I don’t think anyone does. It’s such a waste of energy, thought, and productivity.

Creative people talk about ideas and dreams — no matter how big — anything is possible! While the unimaginative talk about people.

Ever heard of “Everywhere you go, there you are?” You can run to an island at the bottom of Florida, but whatever you are running from will eventually catch up with you. Sunshine and palm trees won’t change you. That is the brutal reality. I dreamt of moving to Key West and tanning on the beach every day. When is the last time I was at the beach? We are lucky to live here but the fact is living here and vacationing here are two completely different worlds. But those random boat days, sunset sails, trips up the Keys or an hour in a hammock with a book — I escape.

Which will this country have first? A female president or an LGBTQ+ one?

We have probably already had an LGBTQ+ president but they weren’t or couldn’t come out. I don’t really think anyone is 100% straight or 100% gay, anyway.

Could you settle this? What are the guidelines for acquiring a local’s discount?

What’s the most sentimental or valued object kept at the bar?

Flip always makes fun of how many “gifts” we get. Just today I opened a package addressed to the bar with penis lime squeezer things. Thank you whoever you are! I have a hidden moose in honor of my son, Finn. He is the most important person in my life and will always be there with me. There are two coins glued to the wall. One is my “Year of Jenn” coin that Grant got for me during my year of taking time for myself and saying yes to everything! There is also a Mac’s Deuce coin. Mac’s is one of the oldest bars in Miami (222 14th St). Mac did the money and checked on the bar every day until he died at the age of 101. Mac’s a place for literally everyone and I am inspired by his hard work and dedication. Livi’s ic grandma gave her a pink unicorn before she passed. We named her “Golda” after her and she watches over 22.

Complete the thought. “I would tell my 22-year-old self

What would you like to see the most 22 months from now?

I would like to see my son back in Key West and a stop to parental alienation. I have not spoken up enough about this but I will in order to help others going through the same thing. It is happening more often than we think. It brings me to another point — no one ever knows what someone is going through behind closed doors. Maybe in 22 months, people can be kinder to each other. ¦