By James C. Sherlock, this was originally published in Bacon’s Rebellion and is published here by agreement.

Yesterday I wrote of the pressures on Tim Miller, Vice President of Student Affairs at JMU, to balance competing views on masking.

Mr. Miller has had plenty of practice. If he walked a tightrope on masks, he tried and fell flat on his face on diversity.

Diversity training. In a March 3 article called “Divided over Diversity”, the JMU newspaper The Breeze broke a story on the weeping, gnashing of teeth and rending of garments at JMU over internal diversity training.

Fox News had broken a story in August about the mandatory training.

“James Madison University in Virginia is training student employees to recognize that people who identify as male, straight, cisgender, or Christian are “oppressors” that engage in the “systematic subjugation” of other social groups.”

The Breeze story recounted how that Fox article and the blowback from it and the related JMU training video (go to The Breeze article to view) were handled by the university.

It also introduced the public to the Office of Student Accountability and Restorative Practices (OSARP).

Here is one of the presentation “Social Justice: An Introductionslides in question. It and the video apparently engaged interest and conflicts within the university community.

As general observation, anyone who had to watch that is owed an apology no matter what the content. The trainers were two women whose presentation skills were akin to fingernails on a blackboard.

One identified herself on a slide as:

I believe that to be oversharing, but I am not on campus. Also from the presentation: 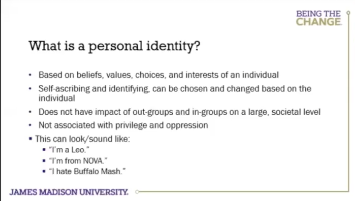 “Outgroups and ingroups on a large, societal level”. I need to keep up.

It must make introductions – personal identity and social identity – somewhat time consuming. Perhaps they have business cards to exchange. And have them reprinted as identities change.

But the story is about the faculty, student, parent and alumni responses that The Breeze reported from internal emails.

Mr. Miller issued a video message in which he both defended diversity training – “privilege is a reality” – and apologized for the training video.

No Wallenda here. The response brought out the hounds.

OSARP. The article also mentions a university office not heretofore reported on. It is named “Office of Student Accountability and Restorative Practices (OSARP).” OSARP works for Dr. Miller.

OSARP does not handle policy violations related to sex and sexual orientation-related harassment, assault, etc. Those are handled by the Title IX office. Instead,

“Staff members in OSARP strive to serve as advocates and allies for social justice.”

“Members of the Accountability Board act as the original decision making body for cases in which a student is charged with minor, major, or flexible policy violations as classified by the Office of Student Accountability and Restorative Practices. These panels evaluate evidence, apply policy, and weigh the perspective of the Responding Party and witnesses to determine if the Responding Party is responsible or not responsible for violating policy and, if necessary, assign sanctions for the case.”

“…many professors applying for tenure have included their Board Membership as “service to the university.”

During the 2019-20 academic year, OSARP “saw 1006 students”. One out of every 20 students at the university. Astonishing. And profoundly troubling.

Exposing OSARP to the public is a major service.