Walletmor has developed a Near Field Communication tag that can be embedded in a user’s hand to enable credit card payments, while the long-term plan is to release a solution similar for a full digital wallet, with an embedded NFC tag for multiple payment sources, access control and medical records.

May 11, 2022A technology startup based in the United Kingdom and Poland is selling a Near Field Communication (NFC) solution that can be embedded under the skin of consumers’ hands, enabling payments without the need for an exterior card, wallet or mobile phone. Walletmor (a blend of the words “wallet” and “tomorrow”) has sold several hundred of the chips, which individuals have had embedded so they can go about paying for goods. In the United States, Walletmor is partnering with contactless payments company Purewrist, which provides accounts that users can link to their chips.

Walletmor’s NFC tag can be embedded in a user’s hand to enable credit card payments.

The technology comes with some key limitations, Walletmor reports. The tag acts as a static payment system, so it can be linked to a specific credit card that comes with an expiration date and cannot be updated. Thus, once the card expires, the embedded tag also expires, meaning a user would have to have it surgically removed or replaced. The company is planning a next-generation solution, however, that would go beyond providing a single payment source.

Walletmor envisions an app and a digital wallet-style solution, similar to that offered by Apple Pay and Google Pay, that could store all keys, identifiers and information typically carried in a wallet, on a chip embedded in a hand. Until then, those using the first-generation chip can download an app from Purewrist to obtain an account through Sutton Bank. They can input an activation code, link their bank card to the rice grain-sized tag and arrange implantation with a physician. Similar technologies have been developed and used on a limited scale (see Wisconsin Company Plans NFC Chip Implant Party and Digital Angel Developing an Implantable Glucose-Sensing RFID Tag).

The Walletmor idea came from a novel that Wojtek Paprota, the company’s co-founder and president, was reading, in which a character used a microchip in his hand to enter an office. Paprota has a background in finance and was interested in developing a similar solution that would bring payment transactions literally into the hands of consumers. “I felt, ‘OK, payments are the way forward,”” he recalls. “I was reaching out to multiple people and companies around the world to see if there [were] any that sell that kind of device.” He could not find any, he says, “So I thought, ‘OK, let’s build one.”‘

Paprota met with an engineer, who tested a system with Paprota’s own credit card information encoded to a chip built and modified to meet EuroPay, MasterCard and Visa contactless payment performance requirements once embedded in his hand. The result is a biopolymer coated tag, slightly larger than a grain of rice, with an NXP P71 NFC chip built into it, compliant with the ISO 14443 standard. After 11 months of engineering, Paprota embedded the first implant in his hand, then began using the chip to make payments. In November 2020, the company completed a new biopolymer implant which was submitted for ISO international testing. 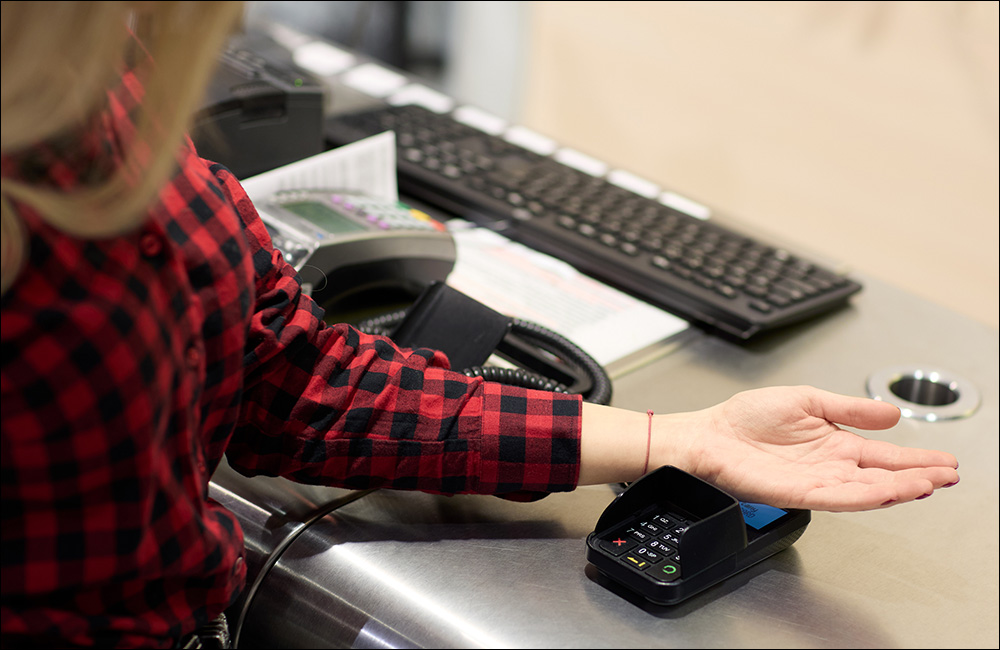 The tag could be read for a variety of purposes, including payments, access control and medical records.

Paprota now has three implants in his hand, one under the skin on the back of his wrist and the other two in the back of his hand, with small scars at the injection sites. The tag placement took into consideration comfort and effective transmission, as the chip needed to be relatively close to the skin’s surface in order to transmit properly. While some NFC chips have been embedded in the webbing between a person’s forefinger and thumb, the chip in the Walletmor solution is slightly too large for that position.

Payment processing requires the transmission of more than simply the unique ID number encoded on the tag—it also needs security- and encryption-based data, as well as a user’s credit card number. As such, a larger chip was necessary that would be able to store more data. The tag also includes an antenna designed by Walletmor to ensure effective transmission through the body. In designing the antenna, Paprota says, “We just needed to adjust the parameters of the antenna so that the RF waves are still readable by the [payment] terminal.”

Because the implant has no impact on a user’s health or conditions, it is not classified as a medical device, and thus does not require the testing and approval that would be necessary with such a classification. Despite that fact, Paprota notes, Walletmor has performed considerable testing to prove the safety of the chip and its polymer casing. “It’s a hell of a risk that you put something inside of your body,” he says, “so you need to prove that it’s, of course, super-safe.” The company conducted the same studies and laboratory testing that are applicable for medical devices, he adds, to ensure biocompatibility and avoid toxicity and irritations.

The tag is available for sale at Walletmor’s website, though the limitations regarding credit card expiration may affect the willingness of most consumers to undergo the process of embedding a piece of technology under their skin. “That’s one of the most important hurdles that we are facing at the moment,” Paprota acknowledges. Customers become discouraged when they hear that the chip has the same lifespan as the credit card, meaning the implanted chip would need to be surgically exchanged every three to five years.

A Future Wallet with Tokenized Data

Walletmor is engineering a version that may have the intelligence to store more of these accounts. “We want to build an application that works more or less like ApplePay,” Paprota states, “similar to having an iPhone.” Since iPhones do not expire, he adds, users can simply add or change the account information they load into their wallet. 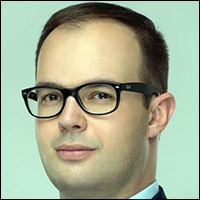 Engineering a device capable of storing a variety of payment methods and other information could be accomplished relatively easily, Paprota says, though he expects that establishing partnerships with the various banking providers and other bodies that provide the being stored will prove more challenging. “We, as a company, are not a bank,” he states. “We are not planning to become a bank.” Instead, Walletmor wants to provide certified devices for storing tokens or cryptographic keys for payment cards. He views the company’s efforts as a means of converting wearable devices to implants.

Walletmor also envisions a solution that would go far beyond financial transactions. “When you think about your wallet,” Paprota says, “the first thing that comes to your mind is probably money. But on top of that, we also keep stuff like business cards, sometimes personal documents, access cards and keys. [something] like a picture of your daughter or husband.” He foresees the implant providing access to all such data. Pieces of information could be stored with their own security parameters, and the chip could be interrogated with the NFC reader built into smartphones.

Paprota dubs this the “ultimate level of security and the ultimate level of convenience.” He attributes the security aspect to the fact that the chip cannot be misplaced or stolen, and because encryption and passwords could be set up for individual tokens of data. “Imagine that you were going to go to the dentist, for example, and you want to share a history of the treatments done to your teeth with the dentist,” he says. “That’s something that he or she needs to know,” while other data could remain secure. “You definitely would not want to share the amount of money that you have on your account. I believe that the implants should be seen as an aggregator of information and an aggregator of the profiles in multiple systems.

Currently, the chip is priced at €200 (or $300 in the United States). This does not cover the cost of implantation, which Walletmor does not provide. If the chip is able to be made small enough in the future, Paprota says, the company expects it could be more easily implanted, possibly even with an injector in a user’s own home.