I’ve always claimed to be a child of the ’90s. Who wouldn’t want to associate with an era in which Calvin Klein’s minimalist dresses or Marc Jacobs’ cool grunge reigned supreme? But any image from my adolescence sometimes reveals a much more brutal reality: low-rise boot-cut jeans, big useless belts, pencil-thin eyebrows, a diamanté-studded watch, even a slightly askew trucker cap. All are garish signifiers of the early 2000s: never mind the minimalism, I aspired to be “Dirrty”-era Christina Aguilera, minus the cheek-baring chaps.

Being embarrassed by one’s teenage style sense isn’t unusual, but partaking so heavily in what is generally considered to be the most horrendous fashion era feels like a particularly heavy weight to bear. It was flashy, skimpy, gaudy. At its best, it gave us denim capris; and “tramp stamps” at its very, very worst.

“The things I consider hallmarks of the era – belly button piercings, aggressive fake tan – it’s all stuff that had previously been considered very low-rent,” says Rax King, author of Tacky: Love Letters to the Worst Culture We Have to Offer, a collection of essays chronicling her experience growing up in the early 2000s. “In the 2000s especially, tackiness really got a leg-up in mainstream acceptance.”

Which is why today’s resurgence of 2000s style feels particularly confronting. It’s been embraced by Gen Z over the past few years, with trends and brands from the era thriving on TikTok and Depop where “a new wave of fashion lovers have adopted and reworked this nostalgic Y2K aesthetic as their own”, according to Peter Semple, the resale site’s chief brand officer. It has now transcended these corners of the internet and arrived, well and truly, in the collections of some of fashion’s most esteemed names. At Miu Miu this season, low-cut skirts and trousers seemed to hang for dear life on the hips. Midriff-baring stretchy tops mixed with brightly coloured bandanas at Versace. At Coperni, fluoro fabrics were twisted and cut out to reveal plenty of skin. Even Chanel had a visible thong peeking over the top of a skirt.

What do we owe this era – and why should I learn to love its aesthetic again? At the time, the global lens was on America, and specifically the West Coast. “One of the huge things that happened was that California style, which prior to that had been more of a regional thing, came into its own as a dominant trend in fashion,” says Alexandra Welker, costume designer of The OC, a seminal style show of the 2000s. “Before that, people looked at New York or Paris or London – those more established fashion centers – for what the trends were going to be.”

LA-based brands such as Juicy Couture, who made velor tracksuits with “Juicy” in Gothic font emblazoned across the seat, and Von Dutch, which found fortune in similarly-logoed trucker caps, became the uniform of choice for Paris Hilton, Jennifer Lopez and Britney Spears, before spreading to the further reaches of the world. Intrinsic to the LA look was a laidback, casual vibe that was influenced by surf culture and initially left the more buttoned-up fashion institutionsbristling. “There was this explosion of beach culture and California celebrity culture, and it just muscled its way onto the world stage,” adds Welker. She notes the proliferation of Uggs, the sheepskin slippers worn by surfers on chilly LA mornings, as the most notable example of this. “We always used Uggs in the film business to keep the actors warm in between shots. And one day, for a scene, I put Mischa [Barton] in a pair with a miniskirt, because that’s what someone from California would wear around the house, and… boom,” says Welker. “I feel bad because I think Patricia Field with Sex and the City and me with The OC really forced Uggs onto the fashion scene.” They eventually faded into irrelevance until 2020 when New York-label Telfard collaborated with the brand on a collection of sheepskin-lined handbags and Western-inspired slippers.

This more casual look was often mixed with flashy accoutrements – designer handbags, shiny jewelry and logoed, oversized sunglasses – that spoke to the rise of aspirational luxury and conspicuous consumption. In Paris, conglomerates LVMH and PPR (which later became Kering) were turning fashion’s heritage houses into power brands, most notably through It bags, which ramped up at the turn of the millennium. In 2002, then-Louis Vuitton artistic director Marc Jacobs invited artist Takashi Murakami to reimagine the brand’s monogram print, painting the logos with his signature style. While Dior’s Saddle and Fendi’s Baguette were popular, none symbolised the 2000s more than the Multicolore bags.

Music videos from the era, particularly those made in America, promoted designer status symbols, while rappers namechecked brands in their lyrics. (Kanye’s “With a baby ‘Loo-uhs’ Vuitton under her underarm” in “Gold Digger” is a classic of the genre). And, more generally, there was a distinctive flashiness to artists’ looks – JLo embodied this mood in “Love Don’t Cost a Thing” (2000), as did Beyoncé in Destiny’s Child and during her solo career. King sees her “Crazy in Love” (2003) as being one of the defining moments of the era. “It was the biggest thing that year – it was just everywhere, all the time,” says King. “And, in that way, it might be considered the death of monoculture, because it was maybe the last thing that everybody was paying that much attention to.” 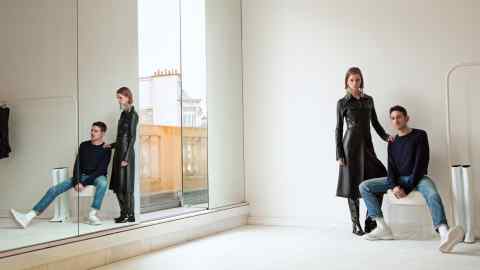 Underpinning all of this, and perhaps why I find it so hard to be nostalgic for this era, is that the late ’90s and early ’00s were a time of hypersexualisation: on television, film crews coaxed college students into taking their clothes off in Girls Gone Wild, contributing to what Ariel Levy coined “raunch culture”. Tabloids speculated about the sex lives and bodies of young celebrities while paparazzi hounded them for upskirt photos. The Victoria’s Secret Fashion Show first aired in 2001, while Hugh Hefner’s bunnies got their own reality TV series.

“I think you have this real confluence of bad-girl culture becoming the It culture, and then all the most famous women in the world partaking in it,” adds Rax King. The fashion industry, too, revelled in a certain kind of sexy shock factor – look to Tom Ford’s controversial “porno-chic” aesthetic at Gucci, which peaked in 2003 with an ad campaign featuring a woman with a “G” shaved into her pubic hair. Even Phoebe Philo, the high priestess of modern minimalism at Celine, where she arrived in 2008, spent the earlier part of that decade designing low-slung bumsters and cutout banana tops as the creative director at Chloé.

Thankfully, modern interpretations of the 2000s style are less about sex and more about embracing the same kind of optimism that came with the turn of a new decade. Much of the wearable side of the resurgence lies in patterned stretch fabrics, which were embraced back then as a reflection of the technological advancements brought about with the new millennium; Today, as in Marine Serre’s recycled polyamide crescent moons or patchwork popcorn tops, they mark the development of eco-friendly fabrics.

London-based Knwls also creates stretchy, skin-tight tops, as well as lace-up trousers and asymmetric-hem dresses – all usually in some kind of earthy, smudgy pattern – that are a dead ringer for styles from the aughts. Co-designer Charlotte Knowles is inspired by the era because she likes the eclecticism, and her role as a melting pot of different references. “People were really expressing themselves – they were confident in their bodies.” Its form-fitting designs have found fans among Nicki Minaj, Beyoncé and the Kardashian-Jenner crowd, as well as actor Hunter Schafer, who wears Knwls in season two of Euphoria. “In season one, the style of the ’90s was popular,” says the show’s costume designer Heidi Bivens, “and in a timeline, Y2K was the next big mark on fashion, which is why it has influenced season two. Fashion I’m nostalgic for feels new for Gen Z – they get to discover it.”

I too would probably wear a stretchy Knwls or Marine Serre top, in the right context. And I wouldn’t mind a pair of Nicolas Ghesquière’s cargo pants, circa 2002, from his Balenciaga heyday. “One of the looks I loved from that era were the little shrunken jackets, worn with low-rise flared jeans and high heels. And a Baguette,” says Welker. “I’d be happy to see somebody wearing that today.”

Maybe not all 2000s style is created equal, and I could learn to embrace it after all. Please, God, not the eyebrows though: I’m still trying to grow mine back.